Toowoomba,Australia, March 2, 2020– Toowoomba, Australia: In a world-first, Kate and Harrison Cann from Toowoomba in Queensland have taken the plunge and are the first couple to tie the knot through KFC’s official wedding service. 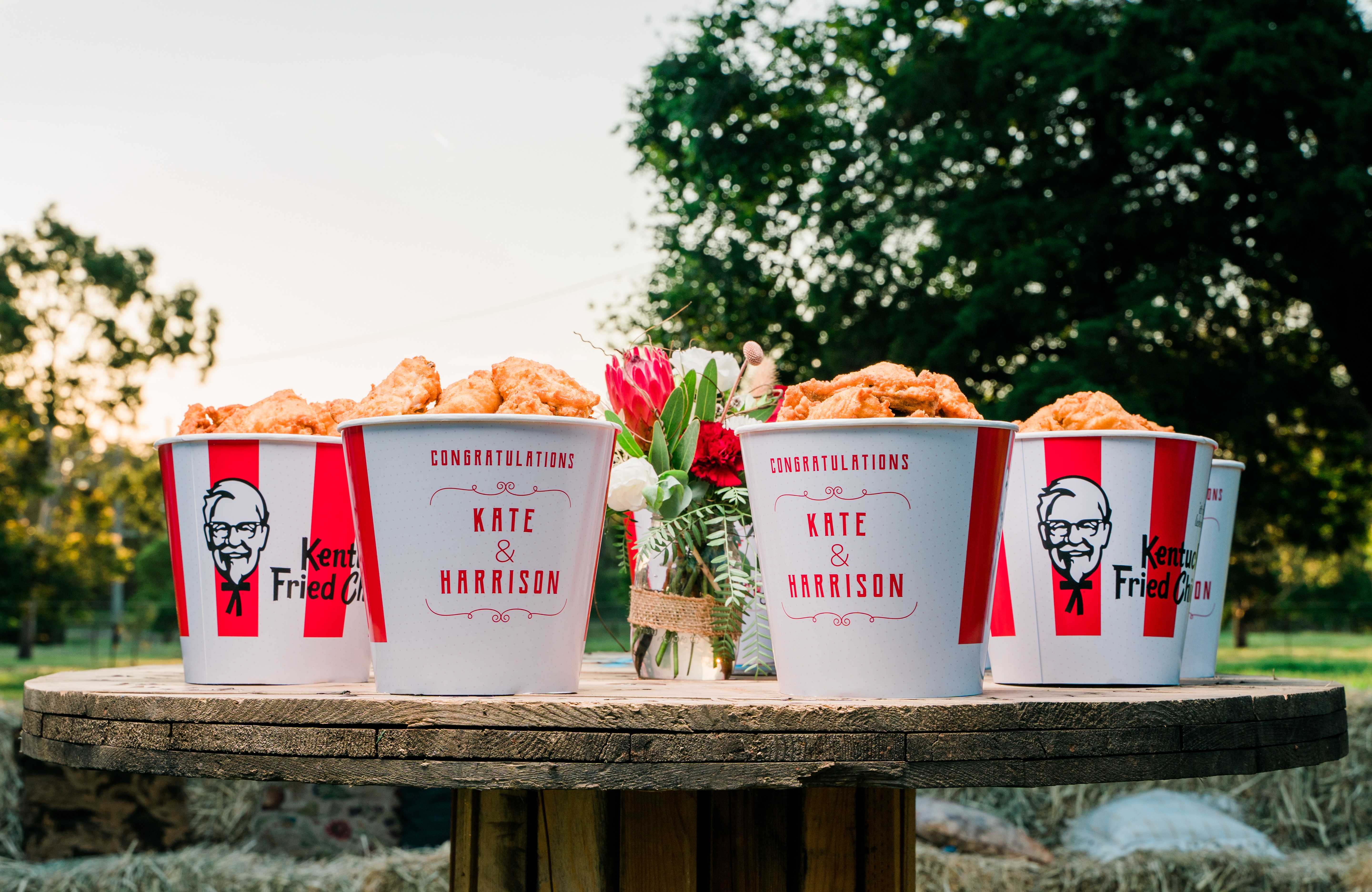 In a ‘twist-er’ of events, the couple pulled off an epic reveal by surprising their friends and family that not only were they holding the wedding ceremony that day, but that they were also the winners of the first ever KFC wedding! 150 guests descended on the family property in Highfields,Toowoomba, and witnessed the couple say “I do” as the KFC-themed celebrant wedded them in holy matrimony.

Kate and Harrison were selected as the lucky couple following their entry to KFC Weddings in September 2019 having created their version of The Fresh Prince of Bel-Air theme tune about their love for each other and KFC. The couple’s romance began on their first date at a KFC and two years later, Harrison popped the question at Aussie landmark Uluru and felt nothing would be more fitting than a KFC Wedding to unite them in wedlock.

The Colonel pulled out all the stops to make it a day to remember with personalized KFC buckets, a KFC-themed wedding cake, a photo booth, and of course the famous KFC Food Truck serving up the Colonel’s famous finger lickin’ Kentucky Fried Chicken®. And no wedding is complete without a party, so the Colonel-styled singer had guests dancing the night away into the early hours.

The newlywed couple, Kate and Harrison Cann, said: “We’re over the moon to have been selected for the first ever KFC Wedding and having the Colonel present on our big day took us back to the first meal we shared together – KFC! Our friends and family were stunned when they arrived to find out it was actually our wedding day – and not just any wedding but a KFC Wedding!”

Kristi Woolrych, CMO at KFC Australia, said: “We’re delighted to see Kate and Harrison get married and celebrate their love for each other over a bucket of Kentucky Fried Chicken® with their nearest and dearest. We hope it’s a day they will remember for the rest of their lives. We can’t wait to see the next lucky couples have their very own KFC Wedding!”

Having announced the new wedding planning service in September 2019, KFC Australia received nearly 2,000 entries from hopeful couples planning to put a ‘wing on it’. With all the applications judged on their originality, creative merit and independent expression, the lucky couples were selected to have their own KFC Wedding put on by the Colonel.