THE BEST FRIED CHICKEN BURGER? IT HAS THE COLONEL’S SIGNATURE!

Starting June 24, in every Kentucky Fried Chicken restaurant in Italy, arrives the Colonel’s Burger! The campaign developed by Isobar, starring the Colonel Harland Sanders. And a new way to enjoy the KFC experience: the new KFC Italia APP.

Milan, Italy, June 24, 2019- Only KFC could dream up the best fried chicken burger in the world! It’s the Colonel’s Burger, starting June 24, in all of the 34 KFCs – Kentucky Fried Chicken restaurants in Italy.

The burger is presented with a campaign starring Colonel Harland Sanders himself, the brand’s founder and historical frontman. Played for the first time in Italy by a professional actor, the Colonel, in an interior monologue, talks about his maniacal “search for perfection” and that touch of craziness that lent him the courage to overcome the obstacles in his way and follow his dream with inventiveness and perseverance, achieving unique and extraordinary results. Like his famous fried chicken, inimitable thanks to the Original Recipe, invented by Harland Sanders himself in 1940, and which can be enjoyed today in the new Colonel’s Burger. 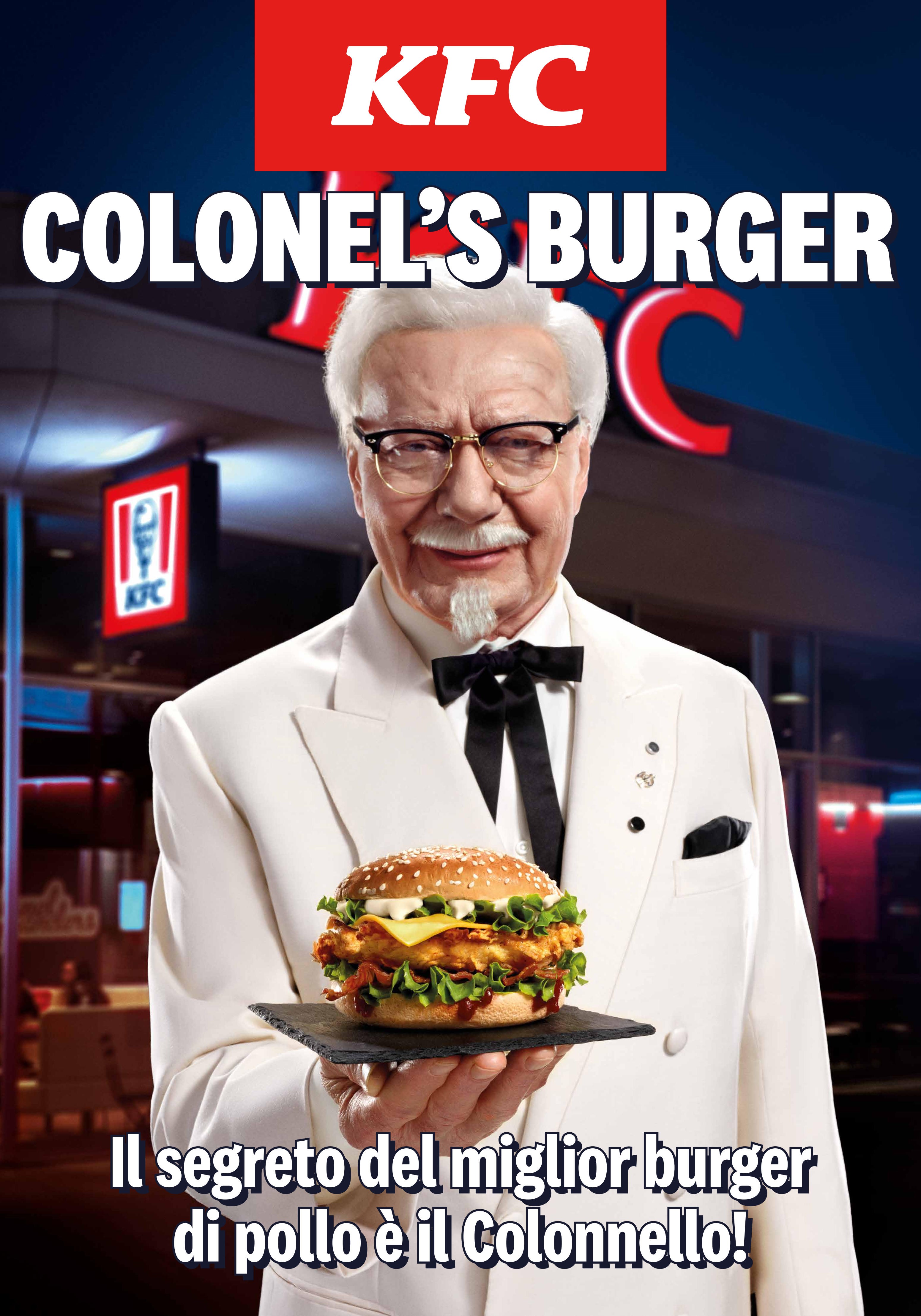 The best fried chicken burger has a secret: the colonel

The Colonel’s Burger is made with the Original Recipe fillet, bacon, cheese, BBQ sauce, mayonnaise and lettuce. It’s special taste has a secret ingredient: the Colonel!

“With the Colonel’s Burger we propose our first signature product, which symbolically represents the entire history of KFC. A story which, following in the footsteps of its founder, Harland Sanders, is marked by attention to details and supervision of the entire production chain, from the selection of the raw materials to the preparation of the finished products and the quality of service at our restaurant- says Nicoletta Pirro Ruggiero, Head of Marketing and Communication of KFC Italia - The**Colonel was really like that, determined but at the same time ironic, and above all able, thanks to these characteristics, to achieve exceptional results, like making the best fried chicken in the world. This is the pillar of our campaign to launch the new burger. The idea of giving a face and a physical presence to the Colonel for the first time in our communication in Italy comes from the desire to entrust him personally with the storytelling of a product that stands apart from others of the same category exactly because it has an inimitable fried chicken, prepared with the Original Recipe invented by Harland Sanders. Who puts his signature on the result, and stands behind it”.

The creative campaign has been developed by Isobar, the global digital agency of the Dentsu Aegis Network group, while the planning was handled by SimpleAgency, of the same group.

Link to the video: https://youtu.be/o5uVVID4y0M

The KFC Italia APP, a new way to enjoy the KFC experience

KFC launch a new way to enjoy the KFC restaurant experience. It’s the new KFC Italia APP, downloadable on App Store and Google Play Store. By using the APP, customers can benefit from exclusive offers for limited times, can find the restaurant nearest them and can join the Colonel’s Club, a loyalty program to collect points that can be used to request free products. As a special offer for this launch, KFC gives its customers an unbeatable promotion: 2 Colonel’s Burgers for the price of 1!

Created in 1930 in the USA, KentuckyFried Chicken is now the most famous brand of restaurants selling chicken worldwide. It is a market leader with over 22.000 restaurants opened in 139nations and giving employment to over 750.000 people. KFC arrived in Italy in2014 and it has now 36 restaurants in 12 regions. KFC is part of Yum! Brands which includes also Pizza Hut and Taco Bell. With over 48.000 restaurants in more than 140 countries, Yum! Brands is one of the largest restaurant companies in the world. www.kfc.it