TENDER CRISPY AND ORIGINAL: THE BEST FRIED CHICKEN AT KFC!

Milan, Italy, February 5, 2020- The new KFC - Kentucky Fried Chicken campaign starts tomorrow, February 6, dedicated to Tenders, the chicken fillet that can be enjoyed in Original Recipe, the famous secret KFC recipe with 11 herbs and spices, and Crispy, with its incredible crunchiness. 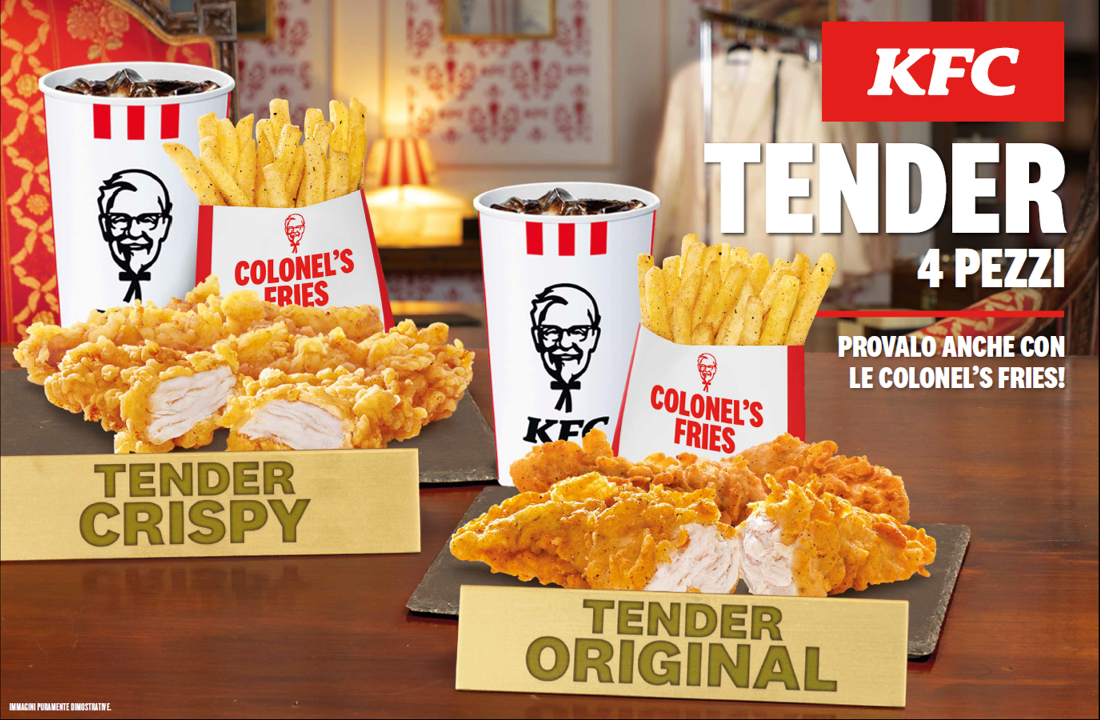 Colonel Harland Sanders is at the center of the campaign, which marks the beginning of a serial story whose development in 2020 will always see the founder of the brand. On this occasion, to narrate the two versions of the Tender, he splits into a surreal dialogue between the two versions of himself: the original Colonel and the "crunchy" Colonel, with curly hair and eyebrows. Both rigorously in the impeccable white suit and black tie.

"Starting a serial story is a strategic choice to enhance the charismatic figure of our founder, whom our customers love very much, and to propose the values he represents: maniacal attention to quality and determination in facing challenges while always maintaining a sense of irony and the ability to have fun," explains Nicoletta Pirro Ruggiero, Head of Marketing, Communication and Digital of KFC Italy. "Red thread that will tie all the episodes is the irresistible and unique taste of KFC chicken, which we want to tell to an increasingly wider audience and for this reason we are differentiating the means. For the first time, with this campaign we use the addressable tv in addition to digital, which always reaches our main audience, that of young people, with great effectiveness."

TWO TENDERS, TWO VERSIONS OF THE COLONEL, A UNIQUE TASTE!
To emphasize the double recipe and a unique, excellent taste, in the story the Colonel "doubles". The original Colonel and the "crispy" Colonel, with curly hair and eyebrows, challenge each other on which is the best fried chicken and agree at the moment of the cross tasting: whatever the recipe, KFC fried chicken is simply irresistible!
The story continues in a sub-episode dedicated to Colonel's Fries, the chips with the secret recipe.

The setting for the entire series is the Colonel's study, which has the wallpaper decorated with a chicken leg motif and of course the map of Kentucky, the chicken-shaped state. A special care has been dedicated to the creation of a sort of treatment patina to characterize the whole serial story: a teamwork between photography direction, color correction and art department to explode the "KFC palette" (red, white, black, fried chicken gilding pantone) creating a real "KFC filter" to make the series unmistakable from the very first scenes.

The creativity is developed by Isobar, global digital agency of the Dentsu Aegis Network group, and the planning is by Simple Agency.