Madrid, Spain, October 31, 2019- KFC introduces 'Chickadilla' a new Mexican-inspired product and, to celebrate it, the creative company PS21 launches 'Los Retornados', an original Day of the Dead campaign. The collective imagination of the North American country believes that souls return to the world of the living every November 2nd, so KFC will give this new product away for life to those who prove they've returned from beyond. 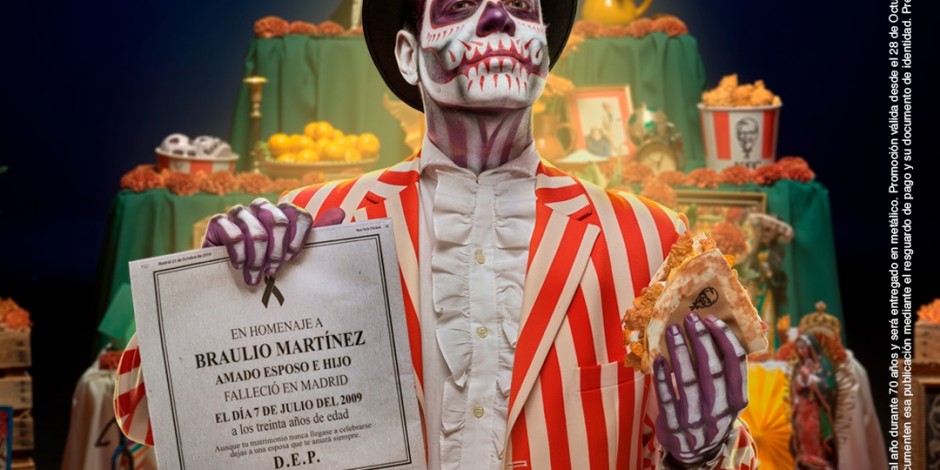 The campaign's stars are real people who have had near-death experiences and explain what it's like to be 'on the other side'. The Returnees' tell this biographical episode in a series of videos and, for a few seconds, the viewer does not know exactly what he is talking about until the taste of 'Chickadilla' is discovered.

The dynamic of the campaign is simple and appeals to the most playful spirit of the Mexican fiesta: Participants will have to publish their obituary in order to be eligible for the prize. To do so, they must hire funeral services in any newspaper - national, regional or local -, publish their obituary and share the obituary on social networks labeling KFC. Participants will be able to get Chickadilla for life.

The campaign consists of two audiovisual pieces of 90'' and 30'', exterior and several digital pieces that will coexist on Facebook, Twitter, Instagram. The graphic universe of the campaign has been developed by the artist Bakea. La Joya was the producer in charge of making the videos.