Louisville, Kentucky, March 5, 2019- Kentucky Fried Chicken®, known for its unique marketing stunts, unveiled today that the company is taking its ideas to the masses via crowdfunding platform Indiegogo by launching KFC Innovations Lab. KFC Innovations Lab was created to bring more of the company's craziest and most innovative marketing ideas to life by providing fans, or anyone that just wants to see if KFC can really pull this off, an opportunity to help turn these ground-breaking ideas into a reality. 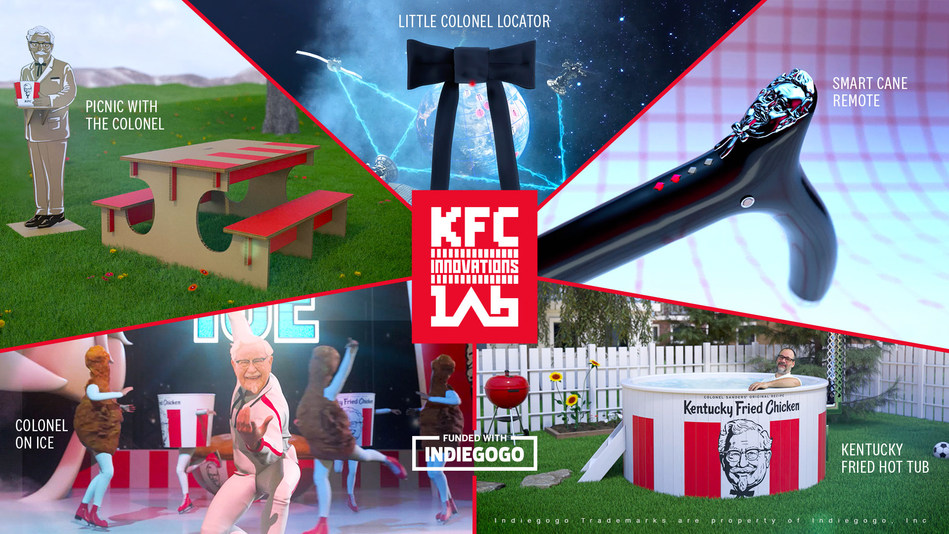 "KFC was founded with the spirit of innovation – the Colonel's patented pressure frying process, bucket packaging, and his secret blend of 11 herbs and spices took the world by storm," saidSteve Kelly, KFC U.S. director of media and digital marketing. "With the launch of KFC Innovations Lab, non-Colonels can now be part of that process and support important projects such as a hot tub that looks like a bucket of fried chicken, so we can keep focusing on making actual buckets of fried chicken."

Over the past several years, KFC has released exclusive products that celebrate the company's heritage and its iconic founder, like its KFC Limited clothing line, the KFC 11 Herbs & Spices Firelog, and Colonel Sanders Floatie. Now, through KFC Innovations Lab, KFC is asking consumers to consider the following ideas and fund their favorite(s):

Should a project become fully backed by supporters, KFC will work with KFC Innovations Lab inventors to begin production of the funded idea and turn KFC's (and the consumers who contributed) dream into a reality. For smaller contributions, KFC is offering exclusive KFC Innovations Lab-branded swag. Depending on the contribution amount, contributors can receive the following perks: KFC Innovations Lab sweatpants, t-shirts or a 3-D puffy sticker pack (limited quantities of swag available). If a project does not reach its target goal, all contributions will be refunded to individual supporters and perks will not be given away. To learn more about KFC's most innovative ideas yet, visit KFC Innovations Lab.