Colonel RoboCop's first directive was to escort a copy of the secret recipe to a maximum security nuclear bunker. Because sometimes a human security guard just won't cut it.

Louisville, Kentucky, February 21, 2019- Kentucky Fried Chicken® revealed today its newest Colonel Sanders – Colonel RoboCop – and disclosed its latest and most enhanced security measure taken to date to protect and preserve its founder's secret blend of 11 herbs and spices used to make its world famous Original Recipe® chicken. Colonel RoboCop isn't just tasked with being the latest face of KFC's famous fried chicken; he was also commissioned to successfully transport an encrypted copy of the secret recipe to one of the most secure vaults in the world –  the Bahnhof maximum security nuclear bunker located in Stockholm, Sweden. 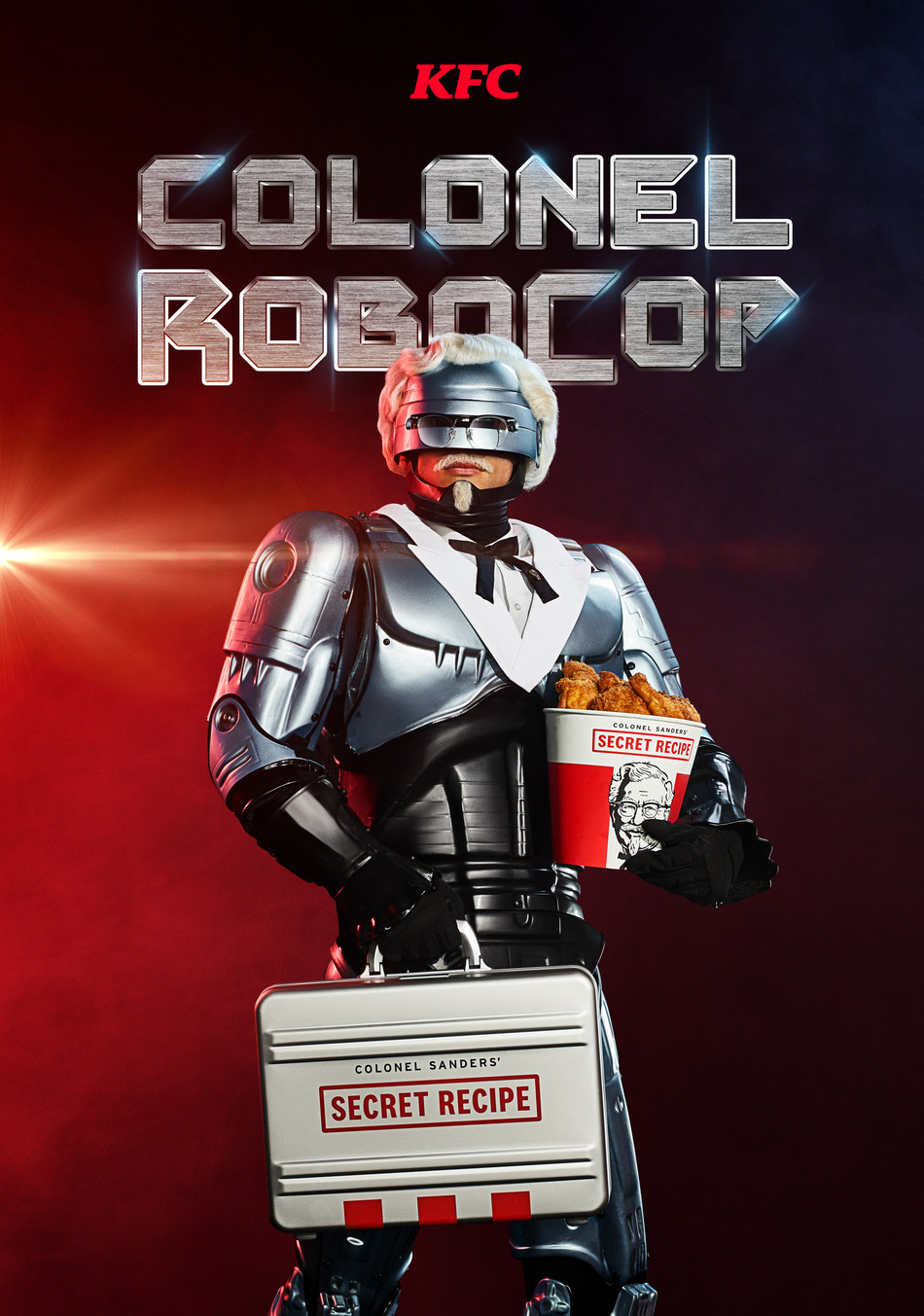 "For decades, fried chicken fans have tried and failed to recreate the distinctive, sought-after taste of the Colonel's secret recipe," saidAndrea Zahumensky, KFC U.S. chief marketing officer. "So more than 30 years after his debut, we commissioned RoboCop with a new directive – to act as protector and preserve a copy of our secret recipe by transporting it to a nuclear proof location. Now, if you happen to survive the apocalypse, you can still enjoy Kentucky Fried Chicken. Makes perfect sense, right?"

Invented by KFC Founder Colonel Harland Sanders, and perfected in 1940 after years of experimentation, the finger lickin' good secret recipe, which blends the iconic 11 herbs and spices, is the crown jewel upon which the company was born, and is still enjoyed today in more than 22,000 restaurants across 135+ countries around the world. While the original secret recipe is still housed at the KFC headquarters, a second, triple-encrypted digital copy was created, transported and is now stored at Bahnhof's data center, a former nuclear bunker named Pionen, to ensure the delicious national treasure lives on forever, should anything ever happen to the original. Between Colonel RoboCop and Bahnhof, KFC has left no stone unturned in its efforts to safeguard the Colonel's legacy.

"Built in 1943, Pionen is a former civil defense center capable of withstanding the blast of a hydrogen bomb," said Jon Karlung, Bahnhof chief executive officer. "It is buried 100-feet-deep inside the White Mountains ofStockholmand is protected behind a 40-centimeters-thick steel door, so KFC can rest assured their secret recipe will stand the test of time."

KFC's secret recipe is arguably the world's best kept trade secret. Since 1970, the original secret recipe of 11 herbs and spices has been carefully guarded at KFC headquarters in a state-of-the-art vault surrounded by motion detectors, cameras and more. In fact, the recipe is so highly guarded, even KFC's president and head chef do not know the exact recipe. Most dramatically, KFC employs two different suppliers, each producing approximately half of the herbs and spices blend, which are then blended together by a third supplier – making it impossible for any one supplier to produce the exact mix of 11 herbs and spices.

In addition to his role transporting and protecting the secret recipe, starting February 24 Colonel RoboCop will appear in a series of ads promoting KFC's four varieties of its famous $20 Fill Up and its $5 Fill Up offers featuring all white meat chicken.

About Bahnhof
Internet with Privacy since 1994.
Bahnhof is a Swedish Internet Service Provider since 1994. Our promise is to give our customers maximum security against surveillance, corporate espionage and leaks - something that is becoming increasingly important when society is digitized. We provide broadband services, including IP telephony and IPTV. In the corporate market, Bahnhof also runs sustainable Data Centers, including the Pionen in Stockholm, which keeps servers connected to the internet continuously and reuse the heat from the servers into the city's district heating system, where it is used to warm up households and tap water. The company is listed on Spotlight Stock Market in Sweden under the name BAHN-B. For more information, visit us: bahnhof.net, facebook.com/B4hnh0f, twitter.com/BahnhofAB, instagram.com/bahnhofbahnhof