The Pop! PEZ dispenser featuring KFC's iconic founder will be available just in time for Halloween

Louisville, Kentucky, October 23, 2019- Kentucky Fried Chicken® has partnered with worldwide pop culture collectibles company Funko to pay homage to KFC's founder once again. This time they have added PEZ to the partnership with a limited-edition Pop! PEZ Colonel Sanders candy dispenser featuring his famous white hair and signature glasses. The Colonel Sanders Pop! PEZ is sure to be the hottest treat this Halloween season. 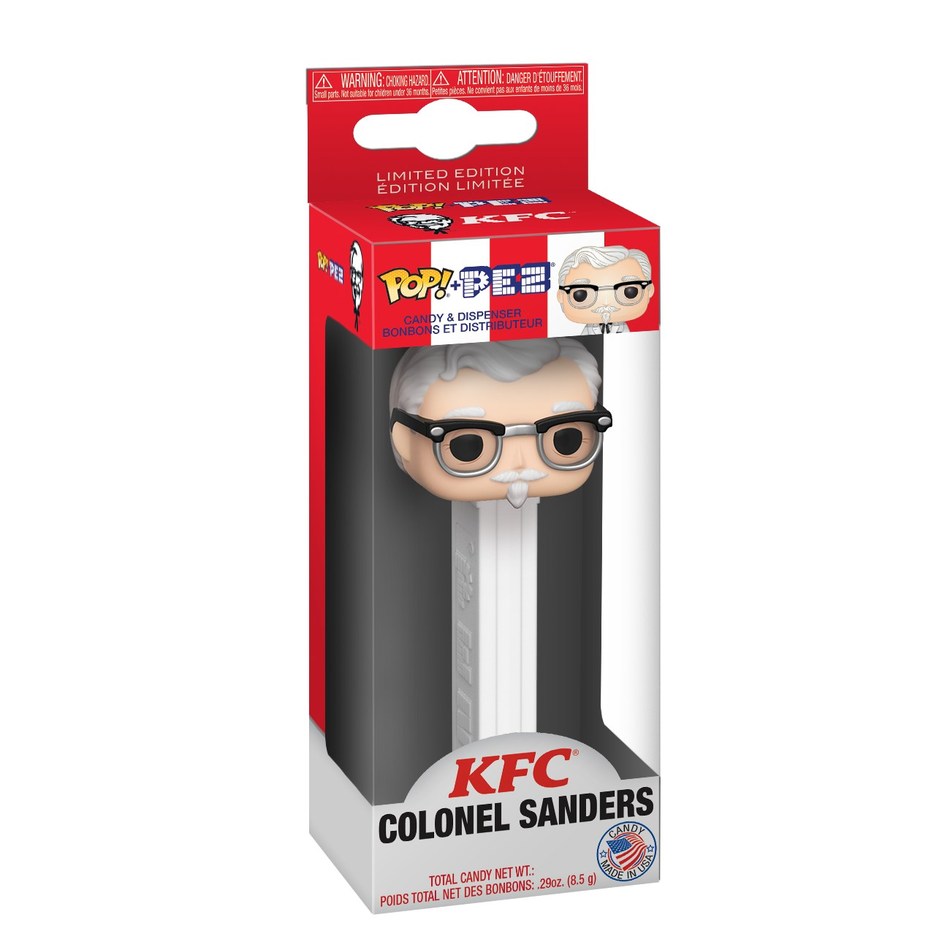 The founding father of KFC's world-famous fried chicken might not be willing to reveal his secret recipe, but if you're nice, he might share a sweet PEZ treat. This Pop! PEZ Colonel Sanders makes a finger lickin' good addition to any collection, trick-or-treat bag or holiday stocking. Funko collectibles are famous for their charming adaptations of a wide range of pop culture icons.

The collectible Colonel Sanders Pop! PEZ dispenser costs $5.99 on Amazon.com and is available at select retailers nationwide, including Barnes & Noble and PEZ.com, for a limited time (limited quantities; prices may vary; tax extra).

"PEZ dispensers are as iconic as the Colonel and his signature white suit," said Andrea Zahumensky, KFC U.S. chief marketing officer. "Now, even the Colonel will be giving out candy this Halloween."

A Colonel Sanders candy dispenser prototype was created for a potential promotion in the early 1990s, and there are only two known to exist. Now, more people will have the opportunity to get their hands on the collectible Colonel Sanders Pop! PEZ dispenser.

"It's not a savory bucket of fried chicken, yet the new Colonel Sanders Pop! PEZ is a sweet addition to our line of ad icons, and we're thrilled to have him join the Pop! PEZ family," said Molly Hartney, Funko chief marketing officer.

Nothing says childhood quite like a PEZ candy dispenser. Dispensing a bit of nostalgia, these toys have been displaying cultural icons for decades. This is the first time KFC and Funko have created a Colonel Sanders Pop! PEZ dispenser. The pair released a limited-edition Colonel Sanders Pop! Funko figurine earlier this year that sold out in the Funko Shop in just 11 minutes.

Based in Orange, CT, PEZ is the pioneer of novelty candy and has been inspiring and innovating since 1927. First marketed as a compressed peppermint candy in 1927 in Vienna, Austria, PEZ sells and markets its products worldwide with locations in Orange, Connecticut and Traun, Austria. Between them, the two locations distribute approximately 70 million dispensers and 5 billion candies per year. PEZ products are available in more than 80 countries worldwide and are collectible for adults and children alike. PEZ dispensers have been a staple of American pop culture for over 60 years. For more information, please visit https://us.pez.com/.