London, United Kingdom, December 30, 2019- Yep, it’s true. The fried chicken gurus at KFC are introducing a permanent vegan offering featuring the famous 11 herbs and spices, and it’s Finger Lickin’ Good. Until now, vegans have been denied the opportunity to enjoy the iconic Original Recipe flavour, as created by the Colonel back in 1952. 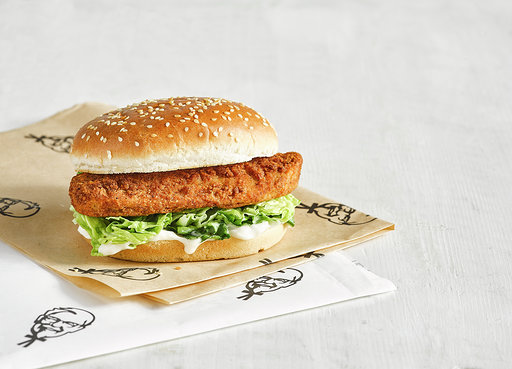 The Vegan Burger pays meat-free homage to KFC’s OG of burgers - the Chicken Filletburger. The usual chicken breast fillet is replaced with a bespoke Quorn fillet, which is coated in the Colonel’s iconic Original Recipe herbs and spices. It’s served with vegan mayonnaise and crisp iceberg lettuce, all within a soft-glazed bun.

Following a staggeringly successful trial in London, Bristol and the Midlands last summer, the KFC Vegan Burger is now being rolled out nationwide. During the trial phase, the vegan burger sold out within four days, with demand over 500% higher than predicted – KFC Gloucester Road sold roughly one burger a minute in the first days following launch.

KFC have since been bombarded with pleas to bring back the vegan burger and make it available nationwide.

Ira Dubinsky, Innovation Director at KFC UK and Ireland said: “The Colonel was all about welcoming everyone to his table – now vegans, flexitarians and our fried chicken fans can all enjoy the taste of our Original Recipe together. We’ve worked hard to perfect the flavour and make a Vegan Burger the Colonel would be proud of. It’s the flavour of KFC, just with zero chicken. ”

Tony Davison, Head of Global Foodservice & QSR at Quorn commented: “The chance to co-create exceptional food with an iconic brand like KFC is a pleasure, to see the results launched with such enthusiasm is fantastic.  The result does the Colonel’s recipe justice, truly transformational vegan food that KFC fans are going to love - a finger lickin’ vegan favourite.”

Dawn Carr, Director of Vegan Corporate Projects at PETA said: “We are delighted to have played a part in KFC’s journey to bring quick, affordable, vegan options to a new audience. There is no doubt this vegan burger will be a huge hit with the skyrocketing numbers of vegans, vegetarians, and flexitarians around the UK. Clucking marvelous!"

The KFC Vegan Burger is available in KFC restaurants nationwide from 2nd January and is available on delivery exclusively with Just Eat.

The Colonel also believed in feeding promise, wherever it’s found. So that’s why we invest heavily in the development and careers of our 27,000employees – we were the first restaurant to launch an honours degree. And since its 2015 launch, our KFC Foundation has paid out grants totaling £5 million to our charity partners who are passionate about developing and nurturing young people across the country.