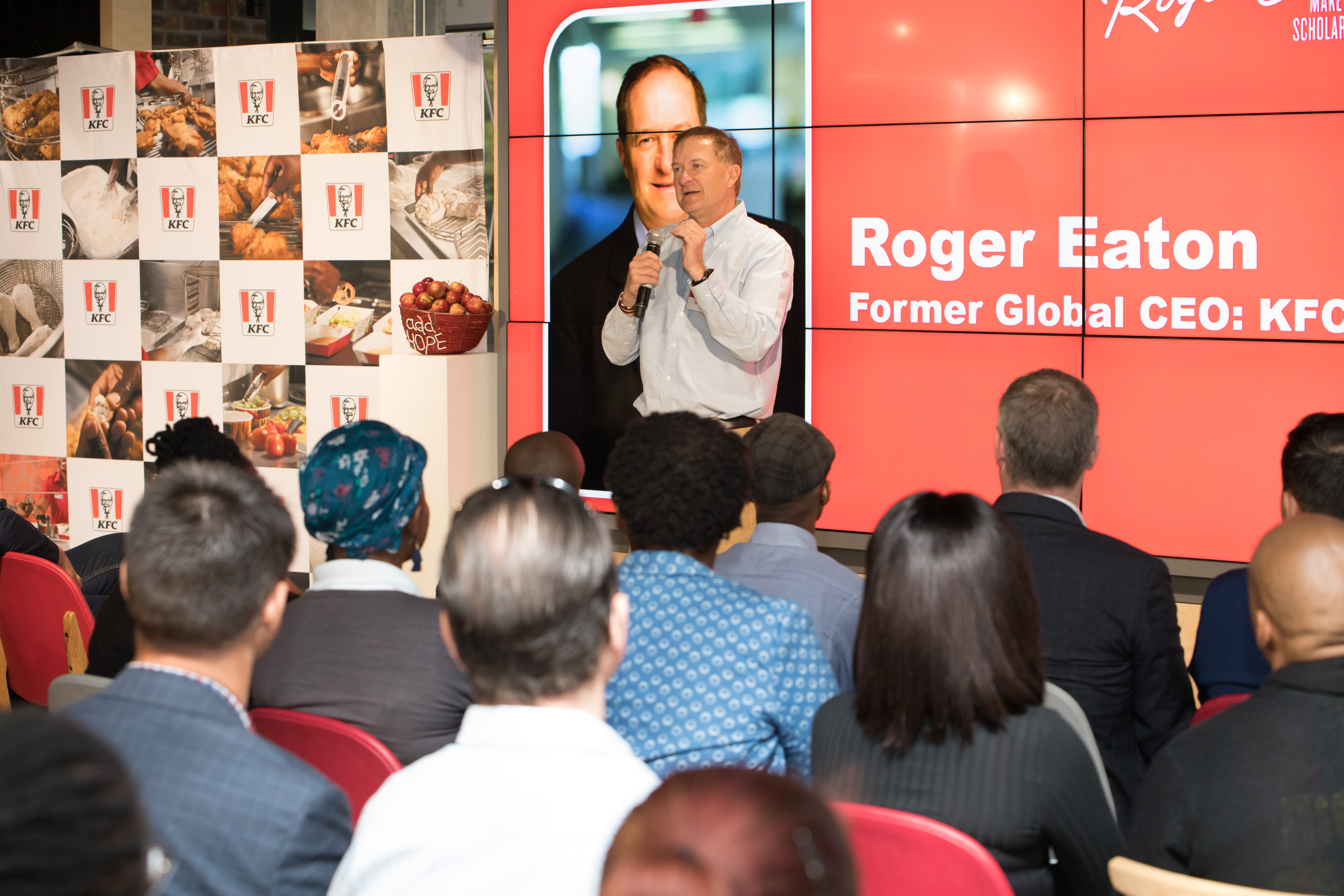 Eaton, who retired as KFC CEO in December last year, after more than 20 years of service with Yum! Brands, was born and raised in South Africa. In honour of his contribution to the company, KFC South Africa established this legacy award in Eaton’s name.

At the awards ceremony Eaton said, “One of my last duties as CEO of KFC saw me come back home to South Africa. In fact, the very last KFC store that I visited officially was in Soweto. This was so incredibly impactful for me as there truly is no other place like South Africa in the world in terms of its beauty, its uniqueness and its people.

“I am truly honoured to be part of this scholarship award, and I plan to provide hands-on guidance to our young awardees. Although academic performance is important, I would ask that our two winners also spend time focusing on their relationship performance. In the last five or so years, I’ve come to realise that building real connections with those around you can drive effectiveness in everything that you do. By getting to know colleagues properly and in turn being open and transparent with them can lead to genuine and trustworthy relationships. If our young scholars pay attention to this aspect in life, they will be amazed at what they can achieve.”

The very first recipients of the scholarship award are Johannesburg-based Mphilisi Emmanuel Dube and Mbuso Maphumula. As school-goers, both young men benefitted from the Add Hope programme through Afrika Tikkun, one of Add Hope’s national beneficiaries. Both young men have chosen to study at the North-West University (NWU).

Dube, who plans to study engineering said, “With this opportunity, I’m never turning back. Through Add Hope and Afrika Tikkun I have people around me who supported me when I needed it most. Someday, my community will need me, and I will be there to support them too.”

Maphumula, who will be studying optometry, said, “I cannot begin to say what it felt like to find out that I had been awarded the scholarship. When I initially applied for the scholarship it took me just a few minutes to complete the application form. Little did I know then that those few minutes would change my life.”

Dube and Maphumula are part of the more than 120 000 community of kids who have benefited from the Add Hope programme. Driven by customer and KFC donations combined, Add Hope enables the provision of vital daily nutrition and nurturing to pre-schoolers and school-goers (and often their families) through the programme’s over 140 beneficiaries.

The Roger Eaton “Make a Difference” Scholarship Award****will be awarded annually to provide two full tertiary qualification bursaries to deserving individuals. The award will be offered to KFC Add Hope beneficiary organisations across the country who can nominate young individuals that they believe exhibit great potential.

Reflecting on the success of the Add Hope initiative, Eaton says the essence of its success comes from the relationships that the company has with its beneficiaries, enabling trust to be nurtured and hope to emerge.

Roger Eaton recently retired as Chief Executive Officer of KFC, a subsidiary of Yum! Brands, Inc. (NYSE: YUM), one of the world’s largest restaurant companies with nearly 43,500 restaurants in 135 countries and territories with 1.5 million associates.

Eaton became Chief Executive Officer of the KFC division on August 18, 2015 and reported directly to Yum! Brands’ CEO. In this role, he led a $26B business that includes more than 22,000 restaurants in more than 135 countries. Eaton is a restaurant industry veteran with more than 20 years’ experience serving in a series of leadership positions for Yum! In his role as CEO, the presidents of the KFC Division and president of KFC U.S and leaders of the leaders of KFC’s functions reported to him.

Previously, Eaton served as Chief Operations Officer for Yum! Brands, where he oversaw global food safety priorities, world-class operations and sustainability efforts for the Company from 2011 to 2015. In addition, he dually served as President of the KFC Division from 2014 to 2015, overseeing KFC’s business in the Middle East, Thailand, Asia FBU (Franchise Business Unit), Canada, Latin America and the Caribbean.

Eaton joined KFC Australia in 1990. Early in his career with Yum! he was Regional Operations Director of KFC South Pacific (SOPAC), General Manager of KFC New Zealand and Finance Director of KFC SOPAC. Between 1996 and 2000, he was President and COO of an Australian Cinema company operating out of Boston, Mass. Eaton returned to Yum! in 2000 as Senior Vice President/Managing Director of YRI South Pacific. In January 2008, he was promoted to Chief Operating and Development Officer-Designate for Yum. In June 2008, Eaton was named President of KFC USA before being promoted to Chief Executive Officer of KFC USA and Yum! Operational Excellence Officer in February 2011.

Throughout his career, Eaton has shown a commitment to excellence by leading a team that has consistently innovated around new product developments, break-through-the-clutter marketing, dramatic operations improvements and best-in-class asset redesigns.

Under his leadership, SOPAC had 27 consecutive quarters of profitable same store sales growth, as well as consistent above target new restaurant development. He is also a champion of people development and the Yum! culture, having coached many successful Yum! leaders who have assumed senior leadership positions within the Company.

Mr. Eaton is also a non-executive director of Molson Coors, Ltd., one of the world’s largest brewing companies, and is Chairman of the Audit Committee. He has served on the board for 5 years.

Born and educated in South Africa, Mr. Eaton holds a post graduate diploma in accounting and a bachelor’s degree in commerce from the University of KwaZulu-Natal in South Africa. He passed the South African Public Accountants and Auditors Board exams in 1982 and is a member of the Australian Institute of Chartered Accountants.

Eaton and his wife Deborah live in Dallas, Texas, and have two children, Pierce and Georgina.

To find out more about Add Hope, visit www.addhope.co.za #AddHope

Add Hope, a powerful initiative started in 2009 that sees KFC customers and staff unite in the fight against hunger, has now reached the milestone of feeding over 120 000 children around the country nutritious meals, every day, through supporting sustainable feeding programmes at a growing list of 143 beneficiary organisations. Add Hope raises money through customer donations added at the till or on the Add Hope website, as well as donating a percentage of KFC profits as its own Corporate Social Responsibility contribution. In 2017, Add Hope raised R49 million, with every cent of customer R2 donations going towards feeding children. Add Hope has raised just over R492 million to date.

KFC is part of Yum! Brands, Inc., the world's largest restaurant company in terms of system restaurants with more than 36,000 restaurants in more than 117 countries and 1.4 million company and franchise associates. Yum! is ranked #214 on the Fortune 500 List, with revenues of more than $12 billion in 2011. KFC Corporation, based in Louisville, Kentucky, is the world's most popular chicken restaurant chain, specialising and famous for its Original Recipe®. The secret recipe of 11 herbs and spices was first developed in 1940 and the same recipe is still used across the world today. Follow us on: www.kfc.co.za, www.twitter.com/kfcsa and www.facebook.com/kfcsa.