BOTTOMLESS PROSECCO CAN FIZZ OFF, THIS CHRISTMAS IT’S ALL ABOUT THE COLONEL’S BOTTOMLESS GRAVY

· Fans can book here for the ultimate KFC Christmas party, featuring a banquet of burgers, buckets and bottomless gravy - PLUS a gospel choir and exclusive KFC swag

London, United Kingdom, December 2, 2019- All you want for Christmas is non-stop KFC gravy? Well, we’ve got you covered. KFC just made Christmas. You and your mates can now reserve a table at the Colonel’s Bottomless Gravy Christmas party, and there won’t be a dry turkey in sight. This is a fried chicken feast like no other, with endless gravy on tap. 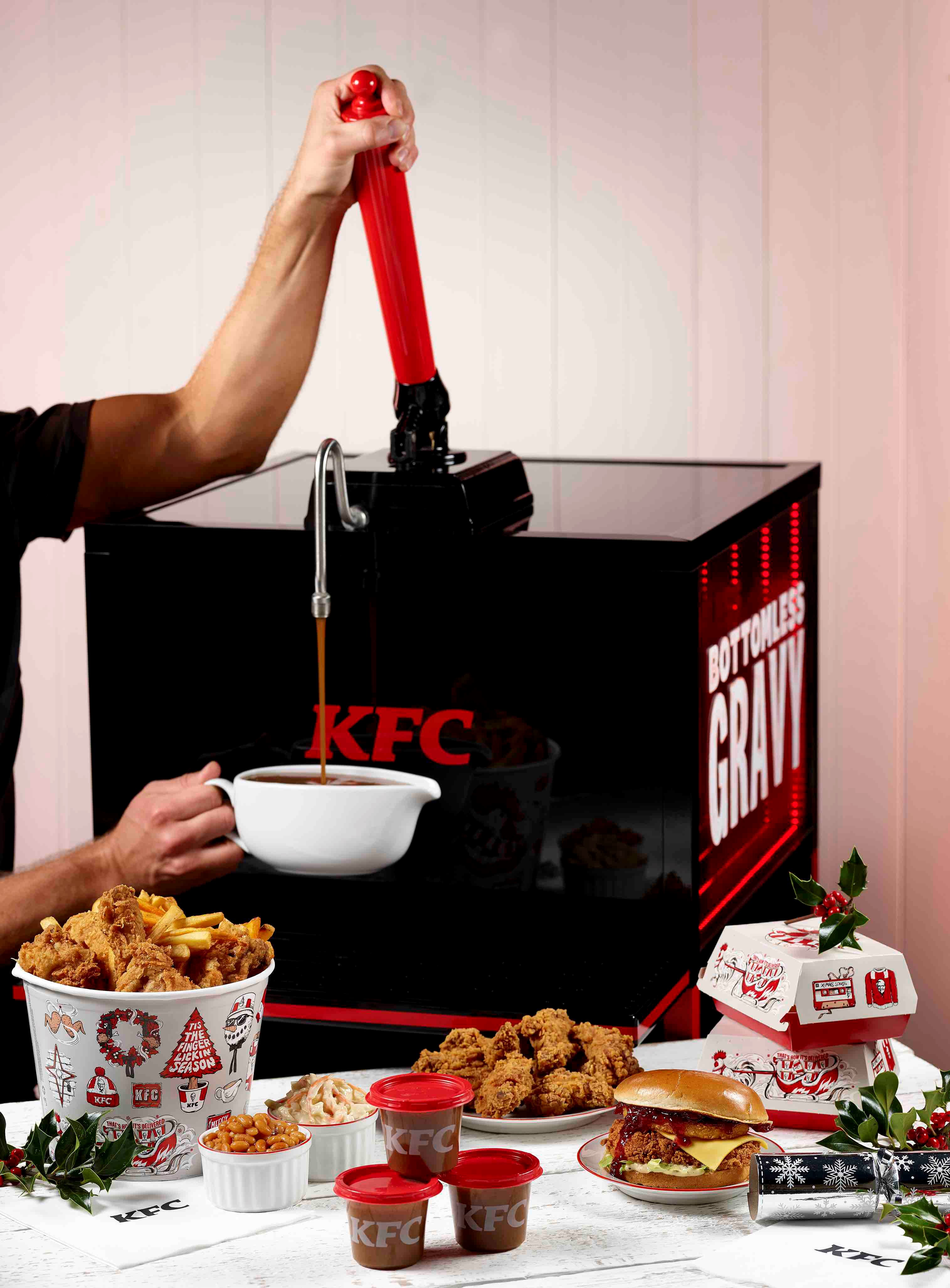 Second only to its iconic fried chicken is KFC’s legendary gravy (you guys really can’t get enough of it, with over 450 million pots sold in December alone). So, we’re delivering the number one thing on everyone’s Christmas list with the Bottomless Gravy Christmas Party. Think burgers, buckets, an endless flow of gravy, Christmas tunes with sass, and all of the necessary chicken themed decorations and exclusive swag.

So what will the Colonel be serving up at his first ever Bottomless Gravy Christmas Party?

· The Festive Burger: A succulent Original Recipe fillet, a crispy hash brown, sage and onion stuffing mayo and topped with a tangy cranberry dressing and a layer of cheese.

· Festive Fries: Loads of our fries sprinkled with the taste of toasted onions, garlic, herbs and smoky flavouring.

· Buckets (and buckets) of chicken: The Festive Burger may be the shining star of Christmas but what’s a KFC feast without buckets of everyone’s favourite Original Recipe chicken?

· Sides: This is a feast with all the trimmings; expect creamy mash, saucy beans, buttery corn and coleslaw.

· Bottomless Gravy: There’ll be no judgement whether you want to dip, smother, drench or drown your Original Recipe chicken, just the promise of unlimited gravy goodness.

The Colonel knew how to throw to a party, so expect a tonne of festive surprises. The Bottomless Gravy Christmas Party is taking place on Monday 9th December at KFC Gloucester Road. Tickets are £10 per person and are extremely limited so be quick and grab them here* while you can. Proceeds from the ticket sales will be donated to the KFC Foundation.

*KFC cannot be held responsible for individual’s experiences of FOMO.